What if reducing food waste could save your city money? In a column on food waste, Liz Goodwin of the World Resources Institute writes: "It takes more land than the size of China to grow all the food that’s never consumed." So it's easy to make the case that producing food that never makes it from farm to fork unnecessarily depletes natural resources. Food production also contributes to greenhouse gases -- whether the food is actually consumed or not. And in a world where so many go to bed malnourished, wasting food to the extent we do is tragic. Now a new report adds another compelling argument for reducing food waste – explaining how it helps businesses, consumers and even cities save money. – Liz Enbysk

Calling it a first-of-its-kind analysis of food waste, The Business Case for Reducing Food Loss and Waste study evaluated financial cost and benefit data for 1,200 sites across 700 companies in 17 countries, finding that nearly every site realized a positive return on its investment to reduce food waste. 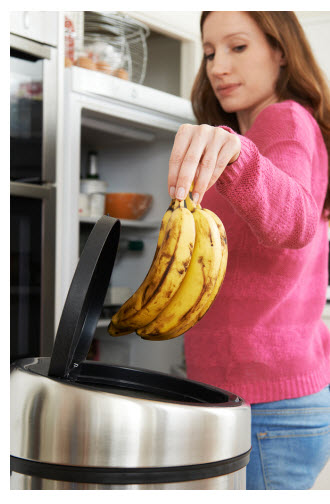 According to a press release from Champions 12.3, the organization that released the report, that 14:1 return on investment comes from:

“A third of the world’s food is wasted – and yet almost a billion people go to bed hungry each night. That simply cannot be right," said Dave Lewis, Group Chief Executive of Tesco and Chair of Champions 12.3. "But even if the moral imperative doesn’t move us, the clear business case should swing people to act. What this research shows is that there’s now no social, environmental or economic reason why we should not come together and take action to reduce food waste."

Savings all around
The researchers believe reducing food waste could save consumers a significant amount of money, based on a nationwide initiative that the UK ran several years back. It included consumer education through a “Love Food Hate Waste” campaign that involved in-store messaging on proper food storage and preparation and use of leftovers along with product innovations like re-sealable salad bags, changes to package sizes and formats and date labelling.  There was also financing to establish baseline data on food waste and monitor progress on reduction.

During this period, according to Champions 12.3, for every £1 the government, companies and the non-profit organization WRAP invested in the initiative, consumers and local governments saved £250.

Waste disposal costs drop
Meanwhile, six London boroughs ran a local pilot that mirrored the national initiative. "After just six months, participating households were wasting 15% less food, which translated to spending less money on food they would have typically purchased and thrown out," the researchers said.

The effort ultimately saved local authorities £8 in avoided waste disposal costs for every £1 invested, and an average of £84 for households participating.

“The success we saw in the United Kingdom proves that it’s possible to make real inroads in reducing food waste,” said Liz Goodwin, Senior Fellow and Director of Food Loss and Waste at World Resources Institute and the new Chair of the London Waste and Recycling Board. “The challenge now is to get every country, major city and company to realize that reducing food loss and waste is a win-win. There are far too many tough, intractable problems in the world -- food loss and waste doesn’t have to be one of them.”

Related articles:
Novel approaches take on food waste (and hunger and GHGs too)
The moral tragedy that cities can fix (and how technology can help)