Submitted by compassionatec… on June 7, 2016

Here's an intriguing concept out of Scotland – and one that other communities or neighborhood groups could easily adopt. The Meal Makers program uses a web-based platform to encourage people to prepare an extra meal for a senior in their community who struggles to cook on their own. As Meal Makers development officer Stuart Miller explains, the project helps tackle health inequality, food poverty and loneliness all at the same time. As you'll read below, it's one of several new efforts underway in Europe to reduce hunger. – Philip Bane

The Scottish government initially provided £60,000 to launch Meal Makers; since then a charitable trust has matched that amount.

“Reducing health inequality is one of the priorities of this Government but we know that the solutions do not lie exclusively with the health service," Scottish Minister of Health Michael Matheson said in a Homecare.Co.UK article. "One of the best ways to reduce health inequality is to bring people together, break down barriers in the community, and reduce isolation" he added. "Another key way is to improve diet and the availability of nutritious food, so Meal Makers is beneficial on a number of levels." 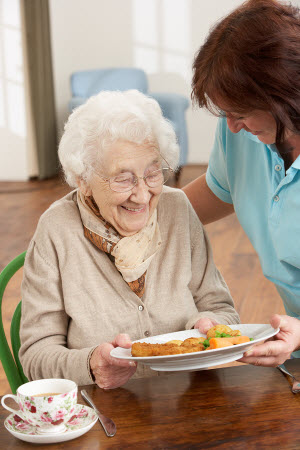 As explained on the Meal Makers site, all participating cooks have to undertake a Protecting Vulnerable Groups (PVG) check as well as a short food hygiene quiz before sharing a meal.

The power of the program is perhaps best explained by a senior who has been on the receiving end of donated meals:

"Adell has been visiting me for a few months now. She brings me a home-cooked meal once a week, made by her own fair hand. When time permits, we jump in the car (one faster than the other) and go for an afternoon tea, a trip to the garden centre or a day trip. It's such a treat to have someone else cook for you and it's lovely to have someone else's baking. As well as food, we do enjoy companionship and we do have a giggle together."

Dave Allen, the Derbyshire County Council's cabinet member for health and communities, is a big fan of the organization's "social eating spaces" concept.

“Super Kitchens are a great way of bringing communities together to socialise and enjoy an affordable meal while making the best use of surplus food from supermarkets," he told the Derbyshire Times. "As well as the social and community side of Super Kitchens, the scheme also supports our work to tackle food poverty.

And Allen points to research showing the lack of proper nutrition affects people’s physical and mental health, which puts pressure on health and social service budgets. "So there’s an economic as well as a moral case for us to take preventative action by supporting schemes like Super Kitchens."

Getting surplus food from grocers to the table
According to FareShare, a UK nonprofit that rescues surplus food for charities, some 5.8 million people in the UK live in ‘deep poverty’ -- making it hard to afford essentials including food. Meanwhile, 3.9 million tonnes of food is wasted every year by the food and drink industry. FareShare estimates 10% of the surplus is fit for consumption.

And networks like those created by FareShare and FoodCloud are increasing the amount of surplus food that is rescued. FoodCloud, for example, has an app and a website that businesses can use to upload details on surplus food they have and their collection timeframe. Charities interested in receiving surplus food receive a text message notifying them of the offer.

Aldi Ireland, a low-cost supermarket chain, just announced it is teaming with FoodCloud to distribute 232 tonnes of surplus food to charities this year instead of throwing it out.

Aldi is also making some operational changes to reduce waste, including smaller package sizes for fresh fruits and vegetables and making perishables available for individual sale. But as Finbar McCarthy, Aldi's group buying director told the Irish Mirror, "Even across an efficient retail operation such as Aldi, there will unavoidably be some unsold, surplus food each day."

And there will be people who can benefit from it. FoodCloud co-founder and CEO Iseult Ward says one in eight people in Ireland suffer from food poverty.

More on this topic…
6 apps helping reduce hunger (and food waste) one tap at a time
5 ways out-of-the-box thinking, compassion and tech are reducing hunger