Like San Francisco to the north, Silicon Valley has a homeless problem that can't be ignored. It’s estimated more than 6,500 people are homeless in Santa Clara County, sharing the streets with people pulling in handsome salaries from some of the country's most high-profile tech companies. It's a region of stark contrasts, for sure. But the good news is, as you'll read below, the innovation that Silicon Valley is famous for isn't confined to corporate campuses. – Liz Enbysk

Karen Addato's motivation is to stop someone else's brother from dying the way hers did – homeless, a John Doe in the county coroner's office, dead at 45 from alcohol poisoning.

"My brother's experience has ignited something within me that is unstoppable," said Addato, Executive Director of Hi-Tech Rover, a nonprofit dedicated to using technology to help Santa Clara County's homeless find jobs, housing and better lives.

It was a stranger who moved Rose Broome to act. Walking along a San Francisco street one cold night, she came across a woman sleeping on the sidewalk. She says she felt a kind of pain, asking herself "why haven't we solved this?"

Broome, who has a strong background in technology, says she made a commitment that night to do something to help. She was thinking a small side project, but the Founder and CEO of HandUp says it turned out to be the focus of her life.

Addato and Broome both spoke about the work their organizations are doing to end suffering during Smart Cities Week Silicon Valley held May 8-10 in Santa Clara and hosted by the Smart Cities Council.

Impact on a shoestring
Addato's focus is the streets of Silicon Valley where her wired, tech-enabled bus rolls up at encampments and parks where volunteers help connect homeless people to services 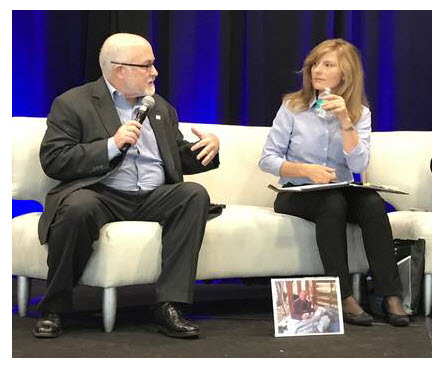 on the spot. Among their successes, she says they've managed to get 73 people off the streets and distributed 186 cell phones. "We're impacting the community on a shoe-string,' she says, explaining she has more technology in the pipeline but needs corporate support to run a pilot.

HandUp, meanwhile, started as a direct-giving fundraising platform, helping nonprofits meet the needs of their disadvantaged clients. Now it's grown into an innovation lab, building software that fights poverty and working in 70 cities across the country.

"What we see," Broome says, "is a lot of human service agencies want to innovate, want to collaborate." But they're not sure how to do it. HandUp steps in to help them. She says her organization just started working with Catholic Charities and Cisco on a data integration project in Santa Clara County. In the past they've worked with the city of San Francisco on a street giving tool – gift cards that the homeless can use at drop-in centers. In Detroit, 10 nonprofits are using the HandUp platform collaboratively.

Without aggregated data from the various agencies involved, identifying individuals with the most critical need for housing help was a challenge. Le led an effort to link records from across all county agencies – one of the few successful efforts to do so in the U.S., according to Daniel Flaming, Roundtable President.

The Roundtable then used the data sets to pull together information about people using county services to identify individuals incurring the highest public cost due to repeat emergency room visits, mental health treatment and the like.

“Often high-cost individuals are not prioritized,” Flaming said, “they might be invisible to us.”

Halil Toros, the Economic Roundtable chief statistician who developed the tool, said the model they built for Santa Clara County identifies future high-cost users based on their use of services in the past. The algorithms are based on 38 variables.

Getting a complete picture of their lives enables a triage scenario that leverages predictive analytics to identify homeless individuals who should receive housing priority. And housing this population, Flaming suggested, “really is a solution that is cheaper than the problem.” He said one year the average cost for the top 1,000 high-cost individuals identified by the tool was $93,000 – but eight people incurred costs over $500,000 and two exceeded $1 million. Housing someone costs about $17,000 a year.

The bottom line? By harnessing the power of data that is often siloed, communities can improve lives and reduce public costs, making more resources available to help more people in need.

A compassionate approach
The session was moderated by Smart Cities Council Managing Director Philip Bane, who also introduced the Compassionate Cities initiative the Council launched last year. The effort, he explained, is about making cities more livable, workable and sustainable for all citizens by innovating to include. Oftentimes, he suggested, technology cities already have can be used to reduce human suffering.