Submitted by compassionatec… on August 8, 2017

Given all the tools and technologies available today, it seems like air pollution ought to be something we can solve – or at least keep from getting worse. But a recent report in the Times of India suggests that an abnormal 152% growth in private vehicles is contributing to dwindling air quality in Hyderabad, the capital city of Telangana in southern India. And in the UK, 16,000 deaths a year are blamed on air pollution, described by Wired as an ongoing crisis. Equally troubling, researchers say climate change will increase the number of deaths from air pollution by hundreds of thousands in coming years. But as you'll read below, it's not all bad news about bad air. – Liz Enbysk

An estimated two million deaths a year globally are due to indoor air pollution, according to the World Health Organization. Outdoor air pollution claims another 1.3 million lives. Children are particularly at risk.

Not everyone agrees how to solve it. Some urban planners will tell you electric cars are the answer. Others advocate car-free zones in central business districts. Making public transit more attractive is another solution. Still others would have everyone riding bikes to work.

Technology offers solutions too – some novel, some tried-and-true. A few examples:

Hamburg cleans up its port
Air quality in port cities can be unhealthy, thanks to ships burning marine fuels to generate power while in port, resulting in large amounts of CO2, NOx, and dangerous particulate 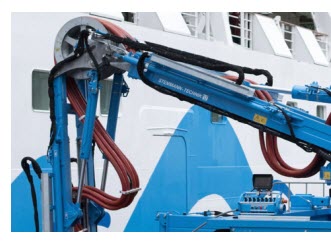 matter. It was a problem in Hamburg, which is a popular destination for people on cruises. Officials wanted to reduce the air and noise pollution from ships in the harbor, so they adopted Siharbor from Siemens. With the shore connection system the ships can draw the power they need from the mainland and turn off the generators while in port.

Meanwhile in the massive Los Angeles-Long Beach port complex, the largest in the U.S., officials released a plan last month to cut air pollution and health risks over the next 20 years by replacing diesel trucks and cargo equipment with zero emissions technology, according to the Los Angeles Times. The ports are reportedly the largest single source of air pollution in Southern California.

Glasgow turns to IoT to monitor air quality
With its Sensing the City pilot project, Glasgow was looking for a more efficient and economical way to monitor air quality and reduce emissions. The project with the University of Strathclyde Institute for Future Cities and the industry-led Centre for Sensor and Imaging Systems (CENSIS) added a low-cost mobile monitoring solution to its existing high-cost, static sensing stations. The static stations, "provide highly accurate data, but their cost limits the quantity of deployments," Gavin Burrows, CENSIS project manager, told TechTarget. "Low-cost systems can be deployed flexibly and rapidly in mobile configurations to complement static stations. This can provide indicative IoT air quality data in areas without coverage in order to support identification of pollution sources."

Mapping pollution in Oakland
Sensors mounted on Google cars started driving the streets of West Oakland in 2015 to map air pollution. According to Hoodline, the cars drove more than 400 miles of streets in West Oakland and parts of East Oakland at least 30 times on 50 separate days to assure an adequate sample size. What the mapping exercise – which ultimately took nearly three million measurements and traveled over 14,000 miles – found was pollution levels varied between and within neighborhoods. In some cases people who live near industrial operations or high-traffic corridors were breathing several times the amount of toxins as neighbors just a block away. Results of the Google study, conducted in collaboration with the Environmental Defense Fund and sensor technology provider Aclima, provided data residents can use to argue against further industrialization of polluted neighborhoods.

Beijing tries this and that
Long a poster child for bad air, the Chinese capital has tried some fascinating approaches to curbing the smog that hovers overhead. One example: The Smog-Free Tower cleans 30,000 cubic meters of air every hour using just 1,170 watts of energy, according to Wired. The smog particles are compressed and used to make things like cufflinks and rings. It was designed by Dutch artist and innovator Daan Roosegaarde who is now working with a Chinese company on a smog-sucking bicycle. Beijing is also considering adding thousands of electric buses to its mass transit fleet.  Beijing Public Transport Group told UPI that each new electric bus would eliminate about 45 tons of carbon dioxide emissions annually.

Manchester pilots pollution tunnels
Motorway tents made with material that can absorb fumes and protect nearby residents are being tested in Manchester by Highways England.  The same tunnel-like concept has been used in the Netherlands and on a smaller scale in China, according to Wired UK. Transportation officials say there are 2.3 thousand miles of motorway across the UK, so the tunnels could represent a significant investment. Meanwhile, in a clean air plan announced last month, the UK government said it would ban new diesel and petrol cars from roadways by 2040 -- a move to encourage electric and hybrid vehicles.