Garbage Trucks: good for picking up waste… and signals of a smart city?

By Claire Daniel and Chris Rowlands.

In the lead up the Smart Cities Week the Smart Cities Council Emerging Innovators are reflecting on the four themes: connected, aware, accelerate and compassion. This week’s post on the theme of ‘connected’ from Emerging Innovators Chris Rowlands and Claire Daniel outlines the latest instalment in the ongoing development of the Bendigo Internet of Things network and how this technology is using the humble garbage truck to connect silos in city management.

The necessity of breaking down silos in city governance to create the smart city often dominates the smart cities debate. Instead of banging our head against these silo walls, a more productive way of looking at the problem is to realise that technology itself is the binding force providing new ways to connect across government, disciplinary and sector boundaries.

Traditionally, technology has limited the amount of information that can be shared (e.g. the size limit on an e-mail attachment or Excel spreadsheet). Networked sensors, improved personal computing power, internet speeds and easy to use cloud computing platforms mean that data for a whole metropolitan region can now easily be stored, shared and analysed by officers in different council departments, officers working for different local governments, and people in different sectors, government, community, industry and academia.

In one such example of technology connecting traditionally separate city services, the City of Greater Bendigo and La Trobe University have been working together to establish an open source, free to use Internet of Things (IoT) network. The network currently consists of two gateways, one on the top of the La Trobe University Campus in Bendigo and another on top of Bendigo’s premier 1000 seat Ulumbarra Theatre.

In order to measure the coverage of the network, the City is looking at an asset in a new way. Garbage trucks visit almost every street once a week across the city and most of these streets they go down twice (once for each side of the street).

This represents an enormous opportunity to optimise how we use such assets. The trucks are already completing these routes so it makes sense to look at what else we can use them for.

Four City of Greater Bendigo garbage trucks equipped with mappers have been collecting data on the coverage and signal strength of the network for about two weeks. This is allowing the City and La Trobe to identify where additional coverage is required and where sensors can already be placed. 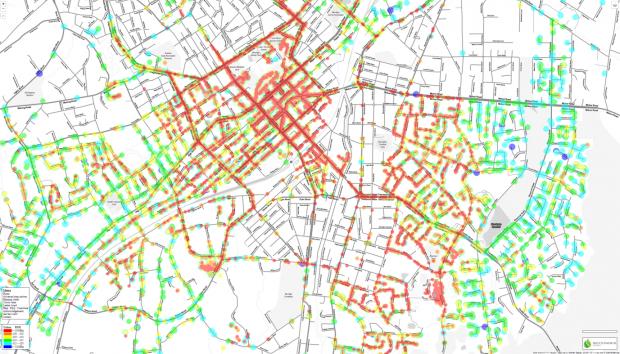 In Bendigo, garbage trucks are no longer just able to collect your waste, they are also picking up IoT signals from all over Bendigo providing important data for the future development of this smart city asset. In the future, they could be collecting even more information about road surface, air quality or other environmental information, all the while, still collecting your garbage.

This article was co-authored by Claire Daniel and Chris Rowlands, both members of the Smart Cities Council Emerging Innovators.

Claire Daniel is a Consultant at SGS Economics and Planning with multi-disciplinary experience across urban planning, data analytics and software development.

Chris Rowlands is an Innovation Officer at the City of Greater Bendigo working on various Smart City projects and helping to develop a culture of innovation.

The views expressed therein are entirely their own.