Connecting rural communities: New efforts to help those left behind

Do you find it difficult to believe that in 2017, there are 34 million Americans who still lack broadband Internet access?  Or that a school teacher in Africa would have to spend a full month's pay just to download a single iTunes movie? Sadly, many people living in rural areas around the world are missing out on the economic and educational opportunities that the Internet provides. But some new initiatives aim to change that. – Liz Enbysk

Of the 34 million in the U.S. who still lack affordable Internet access, some 23.4 million live in rural parts of the country.  Microsoft’s new Rural Airband Initiative announced earlier this month wants to put a dent in that.

The company believes eliminating the rural broadband gap is achievable in the next five years – and has outlined a plan to do that – a strategic approach that combines private sector capital investments focused on expanding broadband coverage through new technologies, coupled with targeted and affordable public-sector support. 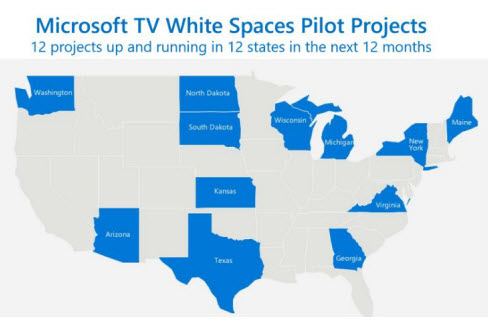 One of the new strategies is to make use of what’s called TV White Spaces spectrum, which is the unused spectrum in the UHF television bands.  Microsoft has been testing the technology for some time, having deployed 20 TV white spaces projects in 17 countries that have served 185,000 users.  We wrote about a white spaces pilot in Seattle several years ago and even earlier about using white spaces to improve education in Africa.

"At Microsoft, we’re prepared to invest our own resources to help serve as a catalyst for broader market adoption of this new model," President Brad Smith said recently. It wants to have 12 pilots up and running in 12 states in the next 12 months.

AT&T connects rural Mississippi
Rural and underserved residents in parts of 15 Mississippi counties are included in technology recently launched by AT&T, which extended its Fixed Wireless Internet as part of its FCC Connect America Fund commitment. As a part of that commitment, AT&T plans to reach over 400,000 locations nationwide by the end of 2017, and over 1.1 million locations nationwide by 2020.

"The future growth of Mississippi's economy relies on innovation and investment," U.S. Senator Roger Wicker said. "This Fixed Wireless Internet service from AT&T is a great example of the innovative thinking necessary to help close the remaining connectivity gap in rural areas across the state."

The service delivers a home Internet connection with download speeds of at least 10Mbps. The connection comes from a wireless tower to a fixed antenna on customers' homes or businesses.

Startup gets innovative in Africa
A post by Jason Deign on a Cisco blog describes the high cost of getting online in Africa – citing the teacher who would have to pay a full month's salary to download a movie or mothers who couldn't send all of their children to school because of the cost of mobile phones.

Deign says coming across situations like those prompted the launch BluPoint. Founded by Mike Santer, the startup re-renders online content so it is accessible offline for free for people who can't access the Internet due to cost, coverage or device constraints.

The system uses what Deign describes as a solar-powered ‘pop-up intranet' service that makes content available on all phones, even those without an Internet connection or browser. Some 50,000 people in Kenya, South Africa and Tanzania have been able to use it to date.

More on this topic:
Between a rock and a hard place: Digital inclusion remains elusive for many
Huawei video: Bridging the Digital Divide in Saskatchewan